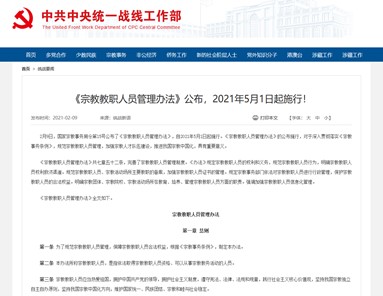 The State Ministry of Religious Affairs published new nationwide rules for religious affairs, which, according to an official announcement by the United Front (an organization under the control of the Communist Party), are intended to promote the "Sinization" of religion in China. It is already the second set of rules after a first publication in August 2017.

The main new provision is the establishment of a national database for all religious dignitaries. In the first paragraph, the new rules require that all religious dignitaries be “patriotic” and “support the leadership of the Chinese Communist Party and the socialist system”. The second paragraph specifies that while dignitaries may conduct religious events, charities and religious studies, they must "educate" believers in patriotism. They are prohibited from propagating “religious extremism and foreign interference” or from disseminating the religion outside of religious schools or through community service. Accepting donations must be in accordance with national law. Further paragraphs regulate the details of the registration and certification of religious figures in an official database maintained by the State Ministry for Religious Affairs. This must always be kept up to date with the cooperation of local authorities.