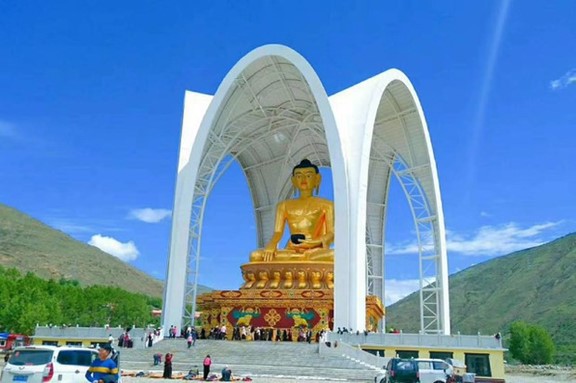 At the end of December 2021, a bronze Buddha statue that was over 30 meters high and erected only 6 years ago was demolished by order of the authorities in Dragko in Kardze Prefecture in eastern Tibet. The statue was financed at the time with donations from believers. 45 prayer wheels and numerous nearby prayer flags were also destroyed. A total of 11 monks from the monastery were arrested, including the abbot of the monastery. They were accused of leaking information about the statue's destruction to foreign countries. Several monks were tortured in what they were told "to teach a lesson". Local residents had to watch and even applaud the demolition of the statue [cf. Tibet information of January 6 and 17, 2022; AROUND].

Now it is known that apparently the monks of the monastery were forced to sign self-declarations that they themselves are to blame for the demolition. It is not known what this "guilt" consists of. The demolition was justified in December with the fact that the statue had exceeded the maximum permitted height. This justification was not plausible because, according to the monks, all permits were obtained before construction.

The arrested 11 monks are free again, but according to informants they are constantly being watched and harassed.