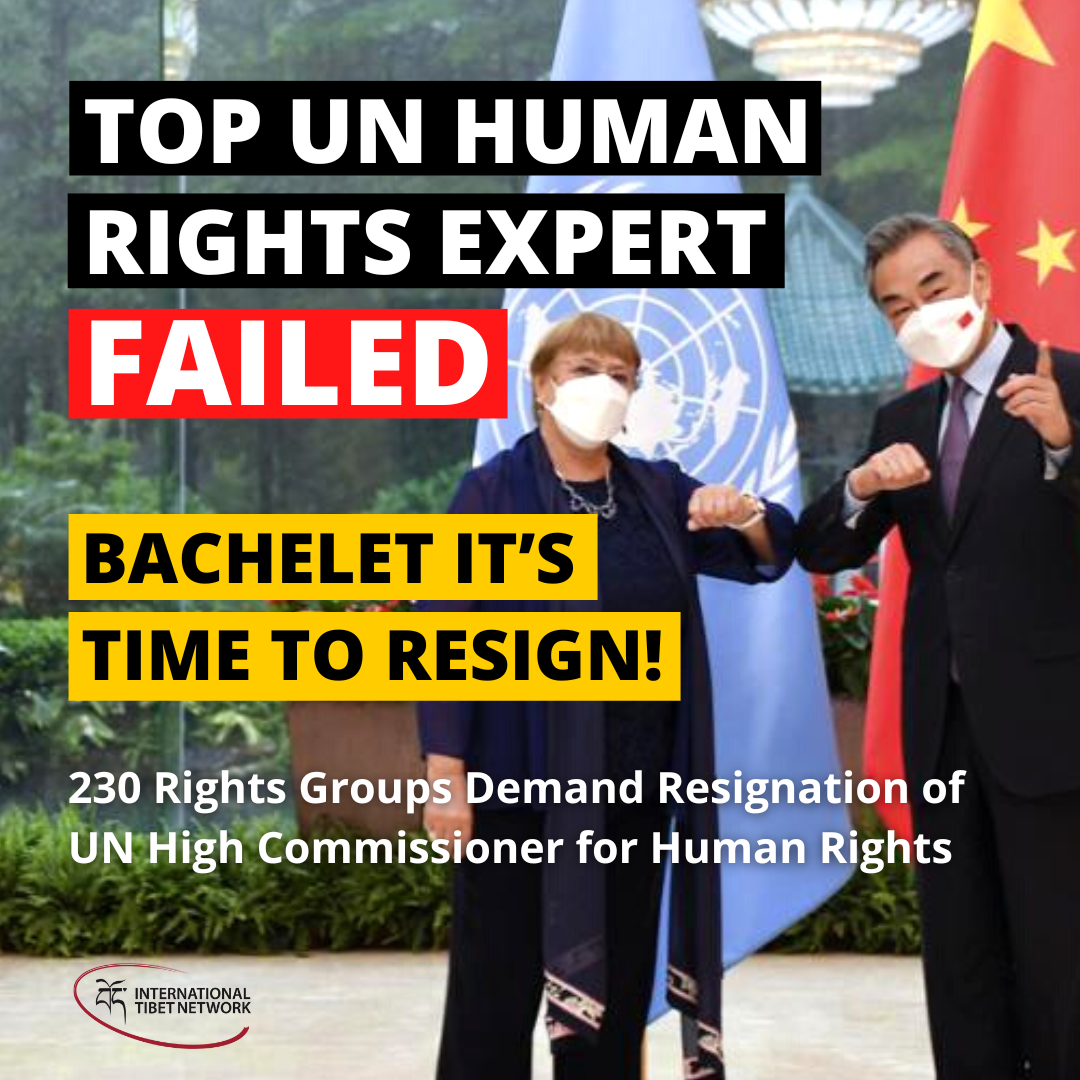 Activists have criticized Michelle Bachelet's six-day visit as glossing over the oppression of Uyghurs, Tibetans, southern Mongolians, Hong Kongers and others

Over 230 Uyghur, Tibetan, South Mongolian, Hong Kong and Chinese pro-democracy and international human rights groups are calling for the immediate resignation of the UN High Commissioner for Human Rights after she whitewashed the Chinese government's human rights abuses during her recent visit to China. The groups are also urging the UN Secretary-General not to propose an extension of her mandate and demanding that the High Commissioner publish immediately the report on human rights abuses against Uyghurs and other Turkic peoples in East Turkestan [Ch: Xinjiang Uyghur Autonomous Region].

During her four-year tenure, Bachelet has not commented on the human rights crisis in Tibet or even asked to enter the occupied country, although there has not been a High Commissioner there since 1998. She did not visit Tibet on this trip and when she finally mentioned it at her press conference concluding the visit, it was brief and general, without taking the rare opportunity to highlight the unprecedented, systematic and escalating attacks on the Tibetan language and identity to criticize and address. It also referred only to the “Tibet Autonomous Region” — what the PRC calls Tibet — ignoring the Tibetan Autonomous Prefectures and Counties in Sichuan, Qinghai, Gansu and Yunnan, which make up half of Tibet and in which more than half of the entire Tibetan population lives.

The High Commissioner missed a much-needed opportunity to meet Chinese leaders as she was reluctant to publicly address and condemn widespread torture, enforced disappearances, arbitrary detentions, organ harvesting and routine persecution of religious communities. Instead, Bachelet praised the Chinese authorities for their "important legal and judicial reforms” and for "Improvements in the Protection of Women's Rights”.

Bachelet also naively posed for a photo op with Chinese Foreign Minister Wang Yi, who presented her with a book of quotes from Xi on "human rights." She also hailed China's commitment to multilateralism, despite ample evidence that Beijing routinely seeks to silence criticism of its human rights record before UN bodies and weaken UN institutions.

The High Commissioner's final statement attempted to regain some legitimacy by stating that she had "practically met with a number of civil society organisations". She failed to mention that this was the first time in four years that she had agreed to meet with affected communities despite repeated requests. By holding a two-hour virtual meeting a few days before her visit, she limited the space and scope of any substantive discussions. The invitation to the meeting came after 220 Tibetan, Uyghur, Hong Kong, South Mongolian and Chinese pro-democracy groups urged the high commissioner to reverse her plans to visit China at the risk of being drawn into one planned by the Chinese Communist Party propaganda minefield.

The High Commissioner's failed visit has not only exacerbated the human rights crisis faced by people living under Chinese government rule, but also severely damaged the integrity of the Office of the High Commissioner for Human Rights in promoting and protecting human rights worldwide. An independent, experienced and honest High Commissioner is essential to ensure truth, justice and redress for crimes committed in violation of international law.

Michelle Bachelet has repeatedly failed to fulfill this important mandate and under these reprehensible conditions the organizations are calling for her immediate resignation.