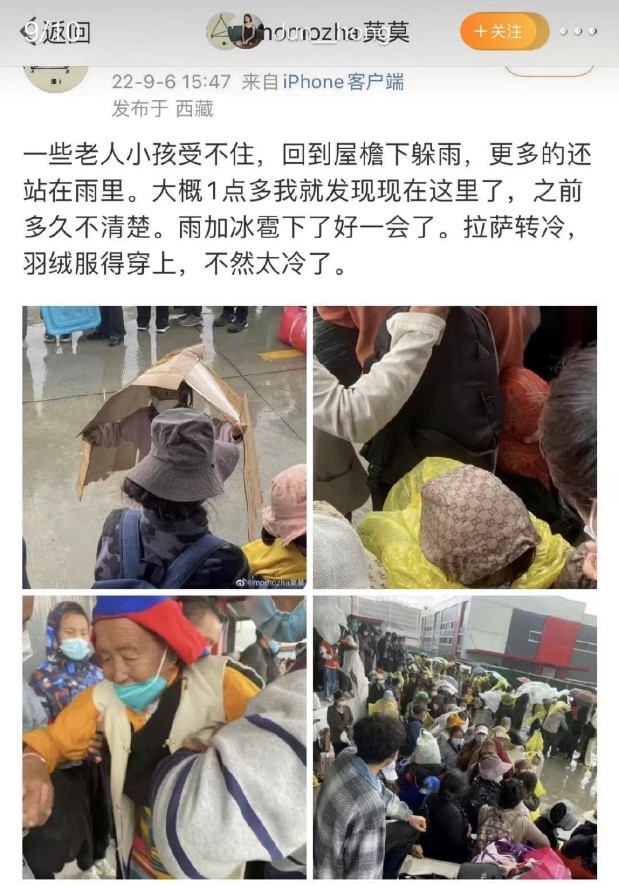 After the authorities boasted that Tibet had remained without corona infection for 920 days, the first cases appeared in early August. The authorities reacted to this with drastic measures such as curfews, travel bans and "disinfection measures". Several officials were also relieved of their offices for alleged incompetence.

Threats and sanctions against "spreading rumors"

Now, more than 6 weeks later, there are numerous, sometimes dramatic descriptions and complaints from those affected about the situation in the social network Weibo. This happened despite a clear warning from the Internet administration of the "Tibet Autonomous Region" (TAR). On August 9, the office expressly warned against spreading "rumors" about the pandemic, which must be countered "with severity". According to government reports, individual Weibo users have apparently already been punished. Chinese media warned those affected "to watch their thumbs [for writing] so they don't get into trouble." A Tibetan woman shared photos of herself bruised after being beaten after complaining about the conditions in isolation.

descriptions of the grievances

Despite threats, some of the Weibo posts criticize the authorities, accusing them of indifference and incompetence.

Many Tibetans complain that they have remained in isolation without adequate food and medical care. Often there is only one meal a day. The hospital in Lhasa is full, and infected people are instead taken to an isolation center, where they only receive medical care 3 days later. Many complain because requests for medical help have been ignored. A pregnant woman suffered a miscarriage in isolation because she was denied medical help. One user complained that he had now been in isolation for 34 days and had to undergo 24 tests and only the last one was positive. Conversely, people with symptoms had to wait several days before even being tested.

Authorities should ask entire family communities to go into isolation, regardless of whether they have tested positive or negative. The request also contained a veiled warning that those who did not voluntarily self-isolate despite testing negative would have to go to worse accommodation if they later tested positive. On the trip, those who tested positive and negative would be driven to the accommodations in the same bus without a distance control and also accommodated there in beds next to each other. A user described that those affected had to wait 5 hours on the bus after arriving at the isolation center before they were assigned accommodation. Several reported that they initially tested negative upon arrival, but later became infected. Some of the shelters in which isolated people are housed are just shells. Photos on Weibo show rooms with bare walls and closely spaced rows of beds. A photo shows a completely dirty and flooded toilet. There are several reports and photos on Weibo of rotten food being delivered. Designations such as "pigsties" are circulating for these accommodations.

Food is becoming scarce in lockdown

Migrant workers and volunteers also complained about their situation. Although not in isolation, they could hardly buy food or petrol because of the lockdown and travel restrictions. In view of the acute shortage, the prices for the few goods have risen so much that they will soon run out of money.

In an unusual twist, Lhasa's vice mayor admitted wrongdoing and apologized for the implementation of the lockdown: "On behalf of the city government, I would like to express my sincere apologies to people of all ethnic groups." The complaints have shown the inadequacies and weaknesses of the city administration.

After similar descriptions and complaints also started on Weibo from Xinjiang, the censors resorted to a diversionary maneuver and flooded the platform first with tourism tips, then days of articles on the death of Elizabeth II. The Chinese journalist Chu Yang sarcastically remarked that the death of the Queen had saved Weibo .