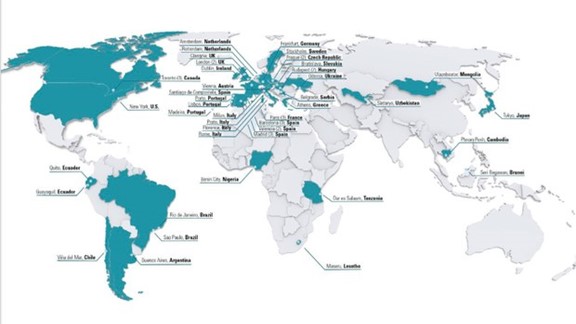 A report by the Safeguard Defenders group describes 110 police stations apparently operated illegally by the Chinese government in various countries. The "Public Security Offices" in the provinces of Zhejiang and Fuzhou should be in charge. These so-called "service stations" are located, for example, in Amsterdam, Rotterdam, Lisbon, Toronto (with 3 "stations" at the same time), Madrid and Belgrade.

The stations are described by China as "service stations" where Chinese citizens living abroad can, for example, extend their driving licenses, report changes in their marital status or carry out health checks because of Corona.

In fact, these stations appear to be putting pressure on dissidents and other citizens to give up their activities or even return to China. A Chinese living in the Netherlands, who had attracted attention through posts critical of China on social media, received a call from the station in Rotterdam to return to China to "solve his problems there". He should also "think of his [living in China] parents".

A Chinese woman in Madrid was to face charges of environmental pollution in Qingtian, Zhejiang province, and return to China. She was invited to a "teaching" by the station in Madrid. After that, she was interviewed by the police in Qingtian via video link. A video exists of the hearing in Madrid, in which the station there is referred to as the "Foreign Service Center in Madrid" of the police station in Qingtian. The Chinese then returned to China. It is not known what happened to her there.

A similar "instruction" is known from a Chinese in Belgrade. Again, this station referred to itself as the "Foreign Police Station of Qingtian," and this citizen also returned to China "voluntarily."

It is not uncommon for people who refuse to return "voluntarily" to use threats, for example against family members living in China or the denial of schooling for children left behind in China. The Toronto Association for Democracy in China, which works in exile, reports calls, sometimes in the middle of the night, with threats such as “your family members will not find work if you do not cooperate”, “your parents' phone numbers will be published online and they will be harassed be», or specifically to Uyghurs «the rest of your family will end up in camps».

The governments of 14 countries have now launched investigations into these "stations", including Austria, Canada, Chile, the Czech Republic, Germany, Ireland, Nigeria, Portugal, Spain, Sweden, the Netherlands, Great Britain and the USA.

At the same time, three Tibet organizations sent a letter to Dutch Prime Minister Rutte. They informed him that several people of Tibetan origin living in the Netherlands had received calls from unknown persons. In some cases, the callers identified themselves as employees of the Chinese embassy, ​​while others gave no information. A conversation with intimidating statements by the caller was recorded and handed over to the police.

As early as January 18, 2022, Safeguard Defenders reported on 62 cases of forced “repatriations” of Chinese citizens. By far the largest part of the repatriations are carried out by – according to our legal understanding – illegal actions by the Chinese government abroad, also cynically referred to as “fox hunting” in China. This practice is covered by an article in China's "National Surveillance Law" of 2018, which allows the following practices, among others: kidnapping from third countries, or luring targets with false promises or blackmail either directly to China, or on sea vessels or international flights in Third countries, which then willingly extradite these individuals to China.

2 years ago, a secret agreement between Switzerland and China caused outrage, allowing employees of the Ministry for State Security to stay here for up to 2 weeks without official status to interview individuals who are to be repatriated from Switzerland to China . The fact that this agreement was kept secret and was not even brought to the attention of the National Council or the Foreign Affairs Committee met with general astonishment. The employees worked with a tourist visa, which allowed them free entry to the countries of the Schengen Agreement. In Switzerland they even received a daily allowance of CHF 200.-.