Since the STFA played a key role in the establishment of the Tibet Parliamentary Group in 1989, it has worked closely with it.

The 2022 group is currently made up of 31 national and state councilors from all political camps and parliamentarians from German and French-speaking Switzerland are represented. In 2022, the co-presidency consists of four people: Fabian Molina (SP), Nik Gugger (EPP), Andrea Geissbühler (SVP) and Nicolas Walder (GP). Maya Graf (GP) is Vice President.

Its aim is to publicize the Tibetan issue nationally, to stimulate proposals and to inform the Federal Council about issues in Tibet.

The members meet two to three times a year. They regularly speak at Tibet rallies and in this way help to raise public awareness of the topic.

The Tibetan Parliamentary Group currently consists of the following members: 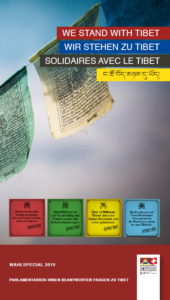 The STFA does the work in the background in all these areas - be it in organizing such events, writing applications, issues to the Federal Council and especially in the care and contact with the politicians.

The following questions, reports and submitted interpellations illustrate the work of the Tibetan Parliamentary Group in cooperation with the STFA: